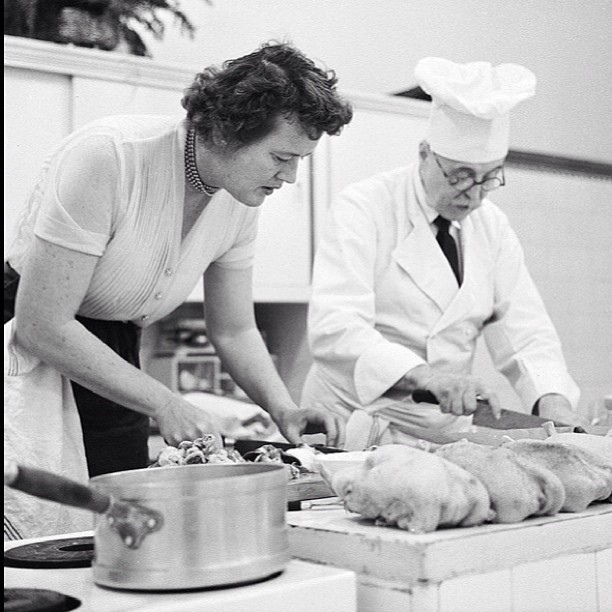 On this day 105 years ago a culinary legend was born. At Delysia Chocolatier we take inspiration from many things, and Julia Child is one of them. You can’t help but admire her fearless nature and the way she went after her dreams when others thought it was merely fodder.

This August we’re dedicating the Birthday Collection Chocolate Truffles to Ms. Julia Child. To celebrate Julia’s birthday we’re also taking a quick look back at her amazing life and how she influenced some of the world’s greatest chefs.

Cooking is a Pleasure Not a Chore

One of Julia Child’s greatest contributions was showing people cooking wasn’t just daily chore but an experience that can be truly enjoyed. The joy she had while cooking was infectious and brought a new perspective to whipping up creative culinary delights. She inspired millions of Americans to put down the fast food and pick up a French cookbook.

She also wasn’t afraid to show her audience that even master chefs make mistakes in the kitchen. Julia reassured her audience that mistakes were okay and served as a learning experience that would improve future dishes. Even Julia probably didn’t realize how influential those lessons were for budding chefs and passionate amateur cooks.

A Pioneer of Cooking Shows

Today it’s hard to believe that cooking shows were once nonexistent. But that was before Julia Child came on the scene. She’s attributed as being a pioneer of televised cooking.

In 1963 Julia was one of the first chefs to bring their talents to television, and arguably the chef that popularized the genre among the masses. She partnered with PBS on her show The French Chef. It was a natural step for a woman that loved sharing her passion and knowledge with others.

Unlike, previous short-lived cooking shows, The French Chef was a resounding success. It was so successful she became the first television educator to win an Emmy. For the next 50 years, Julia had new shows air every decade, which speaks volumes about her television talent.

More Than Just an Amazing Chef

Julia Child was an undeniably amazing chef, but more importantly she was an amazing person. Julia was just as well known in her lifetime for her warm heart and words of wisdom as much as her cooking.

Few people also realize Julia was a true patriot who joined the war effort after the attack on Pearl Harbor. She even volunteered to be stationed in Ceylon, Sri Lanka in 1944 where she met her husband Paul Child and probably got to enjoy the world’s most flavorful cinnamon. You could say that it was fate, because it was Paul’s work that took Julia to France where she first experienced classic French cooking. She was hooked immediately and enrolled in Cordon Bleu culinary school.

People who knew Julia would often comment that she was a genuine, open soul that never put on a front. It was that genuine nature that won over millions of viewers around the world.