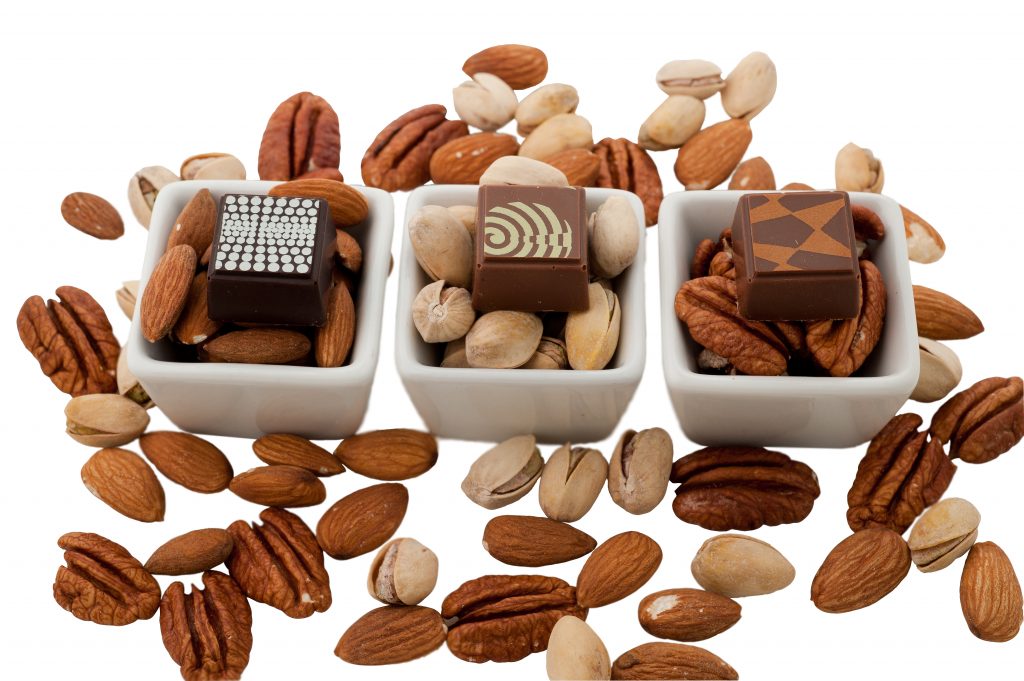 Do you have plans for National Nut Day this Saturday? Here at the Delysia Chocolatier kitchen we’re celebrating the occasion with some of our favorite nut-filled treats. We love them so much we’ve made pecans, almonds and pistachios the main ingredients of the Nut collection chocolate truffles.

What is it about these nuts that make them so deliciously special? For instance, did you know that some nuts are considered fruits while others are seeds? Maybe that’s why nuts pair so well with fruit and chocolate. Keep reading for more fun facts about three of the world’s most popular nuts to celebrate this National Nut Day.

Pecan appreciation is a U.S. invention

In Texas, pecans are serious business. At one time, Texas was the leading producer of pecans in the U.S., and it’s still a major cash crop today.

While nut consumption is known to have begun around 7000 B.C., the pecan is a relatively recent discovery in comparison. There’s no record of pecans until they were discovered in the northern Mexico/southern U.S. region in the 1500s. To date, over 1,000 pecan varieties have been identified.

Once people started eating pecans they just couldn’t stop. Not surprisingly, pecans have been one of the top three most consumed nuts in the U.S. for decades. Even though pecans are notoriously hard to crack, once you get the shell off those can be used as well. During the Civil War, soldiers famously used pecan shells as a coffee replacement. Today pecan shells are used as flavorful bar-be-cue chips, landscaping mulch and more.

Pistachios: one of the longest running nut sensations

Our Pistachio Cranberry Chocolate Bark is a perfect example of how this nut blends salty and sweet to perfection. Their vibrant bright green color is unmistakable, which may have made pistachios appealing to people who were scavenging for nuts and berries long ago.

Pistachios are a part of the cashew family, and are one of the oldest known nuts on the planet. They are so old pistachios are one of only two nuts mentioned in the Bible. Actual cultivation of pistachios began in the Middle East thousands of years ago. Iran is still the world’s number one producer of pistachios, but California is in a close second.

One of the things people like most about pistachios is their high protein/low calorie count. Just one ounce of pistachios contains six grams of protein and only 160 calories. It’s hard to believe something so delicious is low in calories and healthy.

Need a little stress relief? If you’re feeling stressed you may want to grab a handful of pistachios. A Penn State University study found that eating just 1.5 ounces of pistachios a day can lower a person’s systolic blood pressure by 4.8 millimeters.

Americans are eating up healthy almonds

Almonds are one of the nuts that are actually considered a fruit in a shell. In recent years, almonds have become a health food star that’s noted for providing:

Almonds have also been studied for their cardiovascular benefits. For every ounce of almonds you eat a day you can reduce the risk of cardiovascular disease by 3.5%. With those kinds of credentials it’s no surprise almonds are now the most consumed nut in the U.S.

Enjoy this National Nut Day with a warm bite of our Pecan cayenne chocolate bark or our many other nut-filled confections!