As much as we love chocolate here at Delysia Chocolatier, one can’t subsist on it alone. Seems like a new dieting trend is written about almost daily. I’m not one for diets in general – though the Chocolate Diet is next on my list to try – but after reading so much about hitting your body’s reset button, I couldn’t help but feel intrigued by the thought of drinking juice instead of eating. Hey, it was three days of meal-planning already done! Still, it was very out-of-character for me so here are some possible reasons why I did a three-day juice cleanse: 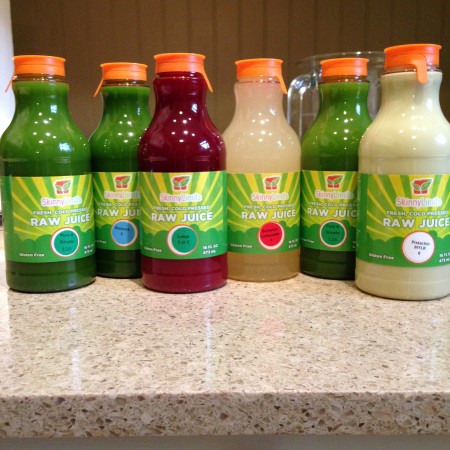 2. I got tired of feeling tired and wanted to give my body a jumpstart
3. I noticed a coupon on Facebook while I was in the middle of devouring my 7th consecutive meal that featured meat and no vegetables.
4. It was my week to cook
5. Gwyneth does them

There are lots of different cleansing options out there from the Master Cleanse {not for the faint, I’ve heard} to the Blueprint Cleanse  and DIY options like Jack LaLanne and VitaMix. I’m not one for committing counter space to a new appliance so I went with local Austin company Skinny Limits. They have a three-day cleanse that comprises of six juices a day. Like I mentioned before, they had a Facebook offer for $10 off. I chose the Variety Cleanse and switched the Cashew Milk for Pistachio Milk. I may or may not be allergic to cashews and really didn’t want to find out the hard way. My total was $153 and I had to pick up my order at the Skinny Limits truck at Mopac and Lake Austin Blvd.

Sidenote: I wasn’t expecting to start my health journey in the parking of a pawn shop but that is where the Skinny Limits trailer is. Despite the odd location, it certainly is convenient. The Facebook offer was a bit too effective, though, and that day the trailer hadn’t received their delivery of cleansing juices. Because I had that special order of Pistachio Milk, I was implored to please come back in an hour. Normally I would have been annoyed but it just so happens that I was down the street from Maudie’s, one of my favorite Tex-Mex places. I celebrated my last lunch pre-cleanse with tacos and queso; all was not lost!

I picked up my juices with a free tote bag and got ready to cleanse.

It’s recommended you start the day with a warm cup of lemon water. I didn’t have any real lemons so I used the expired lemon juice in my fridge. Mental note: pick up lemons. The first juice, Pure & Simple green juice tasted pretty good, but a tad garlicky which is weird because it didn’t contain garlic. But it was very refreshing and the 16-oz bottle seemed like a lot of juice. The cleanse is designed to follow a certain order. All of the green juices are similar and all are delicious. The highlight, though, was the Pistachio Milk. It was AMAZING! Like a delicious milkshake but better. It had vanilla bean, agave nectar and a hint of cinnamon. It was the perfect way to finish the day and I really felt satisfied. There were two lowpoints of the juices themselves: one was the spicy lemonade. It immediately gave me heartburn. It tasted good but the burn, OH THE BURN! The other low was the beet juice. I always want to like beets. Really, they’re such a pretty color. But in juice form, it tasted AWFUL. That was a hard one to swallow on all three days.

The side effects didn’t seem that bad till about an hour after juice two. I got a headache so I decided to lie down. The juice people recommend that and they also say the more toxic you are, the worse your side effects could be. Considering how caffeine, alcohol, and cheese are my normal staples, I’m sure I was pretty toxic.

The second day was a bit rougher. I never felt full from the juice despite testimonials I read saying otherwise. Again, I had the raging headache in the afternoon.  I ate 1/4 of an avocado in the evening and that seemed to make it go away.

Day three was a nightmare. I was so over cleansing. I was tired, bloated, headache-y, crabby…you get the point. I had the kind of headache where it hurt to keep my eyes open. The sight of beet juice turned my stomach. I scarfed down a handful a blueberries to cover up the taste. I was reaching for the Ghost Pepper Bark when Todd came home and made me some quinoa. I ate 1/4 cup of quinoa with lemon and it made a world of difference. I was exhausted and really ready to eat again.

However…the morning after, I had clarity that I hadn’t experienced in years. Though I didn’t lose any weight, I definitely felt lighter. I wasn’t craving burgers and fries like I thought I would. I ate lightly all day – but still indulged on a small piece of the bark – and was able to focus on every task I had presented to me. Even now, a few weeks later, I feel really good. I’m making better food choices – salad over cheese – and I’m more motivated to work out. So I no longer regret the expense and the pain of day three.

Would I recommend a cleanse? To somebody like me, no way. There are other ways to lose weight and get a diet on track. But if you’re not as obsessed with tacos and queso as I am, go for it. Though I’ll admit that the thought of queso right now still doesn’t appeal to me. And that’s just weird!

Stay tuned for next month when I try the Chocolate Diet. I’m more excited for that one than I am about cleansing.

Skinny Limits did not pay for or endorse this post. There are lots of other local companies that do cleanses. Snap Kitchen, Juiceland, and Peoples Pharmacy come to mind.

One response to “Are Juice Cleanses Worth It? Delysia’s Lisa Tries One Out”