Traditionally, weddings have a tendency to veer towards the Bride-centric. Which is why the groom’s cake was invented.

Origin of the Groom’s Cake 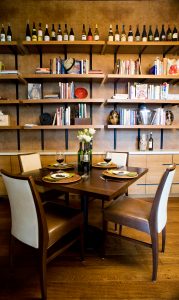 This inspired idea of giving the groom a small share of the wedding limelight originated in Victorian England. At the time, it was a custom to serve three cakes. During the main event, guests could fight over pieces of multi-storied wedding cake. However, following the reception, a more modest bride’s cake and groom’s cake were sliced and served, respectively, to bridesmaids and groomsmen.

Groom’s cakes were richer and denser than wedding cakes. Often, they were fruitcakes. Flavored with dark chocolate and drenched with liqueurs, their heavy richness was deemed more appropriate to the “stronger sex.”

The Groom’s Cake in America

The tradition of groom’s cakes migrated with British colonists to the New World. In America, groom’s cakes found most favor in the Southeast. By then, cakes made with processed flour had supplanted fruit cakes. To set themselves apart from the light texture, delicate vanilla flavor and frilly white frosting of bridal cakes, groom’s cakes were made of dark chocolate that was deemed more masculine. However, it may just have been more delicious!

On U.S. soil, the groom’s cake tradition underwent some interesting evolutions. One involved giving the groomsmen free creative reign to decorate the groom’s cake on the day of the wedding. Another ritual was to gift slices of groom’s cake to each unmarried female guest. According to popular belief, a woman who slept with the cake under her pillow would have sweet dreams of her future husband. (Never mind that she’d also get chocolate stains all over the sheets.)

These days, brides often order groom’s cakes. Many women offer them as calorie-laden thanks for their soon-to-be husbands’ good sportsmanship amidst the matrimonial mayhem that precedes the wedding. As such, they often plan thematic or personalized cakes that carry a special meaning. Cakes that pay clever homage to a groom’s favorite football team, hobby, or even a childhood chocolate bar, are highly popular.

Unlike wedding cakes, groom’s cakes can more easily break with convention. Pastry chefs can take aesthetic risks and boldly venture into new territory in terms of taste and texture. But when it comes to flavor, chocolate still tends to rule. For this reason, we suggest enhancing a cake’s visual and gustatory appeal by adorning it with delicious chocolate bark, molded chocolate, or chocolate truffles made by Delysia chocolatier.

Contemporary groom’s cakes can be creative, kitschy, or just plain fun. Because they tend towards eye-popping, they are less prone to share double billing with the more formal wedding cake at the reception. More often, groom’s cakes are served at a rehearsal dinner or post-wedding barbecue. At such events, they can be savored in a more casual setting – and they won’t be upstaged by the bride.