With Valentine’s Day quickly approaching, millions of people will indulge in the rich sweetness of chocolate over the next few weeks.  But there is more to that sweet taste than you might think, especially when it comes to the chemistry of chocolate.

In fact, chocolate contains a potent chemical compound in the same category as nicotine, quinine and morphine.

The chocolate in Delysia’s handmade truffles, and all of the chocolate treats you consume, can be traced back to the tropical cacao tree.  The Latin name for the cacao tree – Theobroma Cacao – derives from the Greek words “theo” and “brosi” and roughly translates to “food for the gods.” These root words also give name to a potent plant alkaloid found in all chocolate products called theobromine. 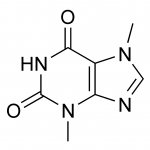 Alkaloids are naturally occurring chemical compounds found in many types of living organisms, from fungi to plants.  The plant alkaloid theobromine is made up of several carbon, nitrogen, hydrogen and oxygen atoms and is closely related to caffeine.  Both caffeine and theobromine have similar effects on humans, though caffeine’s influence is far stronger and more recognizable.

For some species, theobromine can have severe implications.  Vets do not warn against giving chocolate to dogs for superficial reasons.  Our four-legged friends lack an enzyme to digest theobromine, and could suffer a deadly reaction after eating even a small amount of chocolate.

For humans, however, the effects of theobromine are not so severe.  Humans metabolize theobromine much faster than other species, and in moderate amounts the alkaloid can even have positive effects.  Most of us can think of a time when we’ve turned to chocolate to lift our spirits.  As it turns out, it isn’t just the sweet taste that improves our mood.  It all comes down to the chemistry of chocolate.