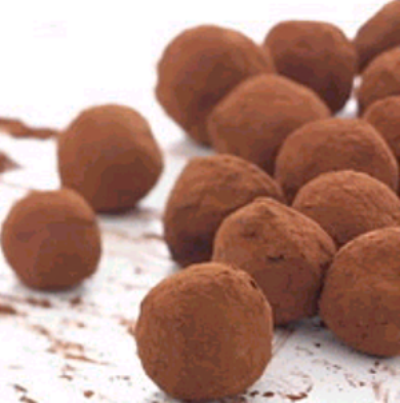 The name “truffle” is French, and means “a small mushroom.” These chocolate delights were given this name because of their resemblance to the luxurious fungus found in the French Perigord region and the Piedmont area of Italy.

A chocolate truffle is a confection made of a round ganache center, often flavored, and typically covered with a thin, hard shell of milk, dark or white chocolate. Ganache is a velvety smooth combination of solid chocolate and cream. When cooked at just the right temperature, the chocolate cream mixture cools to form a rich and firm ganache with an intense & luxurious chocolate flavor.

Like the original truffle, chocolate truffles have become synonymous with luxury, as well as a sumptuous taste experience.

Legend states that the chocolate truffle was created in the kitchen of French culinary giant Auguste Escoffier during the 1920s. One day, when his stagiaire (apprentice) attempted to make pastry cream, he accidentally poured hot cream into a bowl of chocolate chunks rather than in the bowl of sugared eggs. As the mixture cooled, he found that he could work the chocolate mixture with his hands to form bumpy, lopsided balls. After rolling the new creation in cocoa powder, he was struck by their resemblance to the small mushrooms which grew wild in the French forests. Thus, the truffle was born.

The chocolate truffle quickly became populate throughout Europe, North America, and the Far East, each area creating its own variation, recipe, & method. Since that time, the French chocolate truffles have come to represent the finest and most luxurious chocolates available.