The journey to Aspen has been a dream since the first time I participated in a wine festival. Wine is part of the fiber of Delysia Chocolatier. A chance meeting with Becker Vineyards launched Delysia down a path of creating chocolates with wines over five years ago. It’s how we started the business, how we continue to grow the business, and is an integral part of our future.

Path to an Invitation
Standing in the tents at the end of the inaugural Austin Food & Wine Festival in 2012 – after having an exciting weekend of meeting celebrity chefs and potential customers – I declared that I wanted to one day exhibit at the Aspen Food & Wine Classic. My husband said, “OK,” to the notion, but I don’t think he knew I was actually being serious.

I was going to quietly apply to the 2013 Aspen festival, but with the issues with construction of the kitchen, this dream went by the wayside. I did speak to the organizers, who told me most food artisans apply 5-6 years before receiving an invitation. So when the applications were available this year, I decided to start the journey – we would definitely be ready for this level of national expose in five years, should we be so lucky to be invited.

It was a late night in April, I was checking my email one last time for the day. I saw an email from the Aspen organizers and said to my husband, “Looks like I received the thank you for applying, please try again next year,” email. He asked what it said. I had to re-read the email five times – I thought for sure my eyes were playing tricks on me. We were invited to go to Aspen!

The Preparation
Being invited to exhibit was one thing. Determining the logistics of how to get everything 1200 miles from Austin to Aspen was a completely different task. We window shopped for a cargo van, considered renting a minivan or truck, and thought about shipping everything via FedEX. In the end, we convinced a very good friend who has helped us with Delysia from the very beginning (and actually knew I was serious when I first mentioned exhibiting in Aspen) to tag along – and of course, use his truck.

And that wasn’t all of the preparations – new flavors, new setups, new table linens and signage, even new business cards and collateral. This was the big leagues – everything had to be perfect!

Exhausted, physically and emotionally – the most tired I have been since starting the business – we packed up the car for the drive to Aspen. We had only been home for two weeks since our trip to Napa & Sonoma (more blogs on that trip in the coming weeks). The Food & Wine Classic in Aspen is three days, with over 6000 attendees, exhibitors, and trade representatives. I had to to make 4000 truffles, 15 lbs of ghost pepper bark, and 9 lbs of pistachio cranberry bark. Once I filled all of my wholesale accounts, online orders, and weddings, I only had a week left to focus on preparation for Aspen. I worked day and night, even up until 3am the morning we were to leave Austin. Miraculously I managed to accomplish the task (I wish I had a picture of all the chocolates laid out!!)

As you can imagine, I slept for most of the two-day drive. I obviously needed the rest. But we had a blast, with kids in-tow, and we managed to find fun places to stop throughout the drive. Lunch at Cooper’s BBQ in Llano, hotel stay in Amarillo (kids were very confused by the aroma of cattle when there were none to be seen!), and playing in the snow in Independence Pass including a snowball fight with their dad.

The Behind the Scenes at the Festival 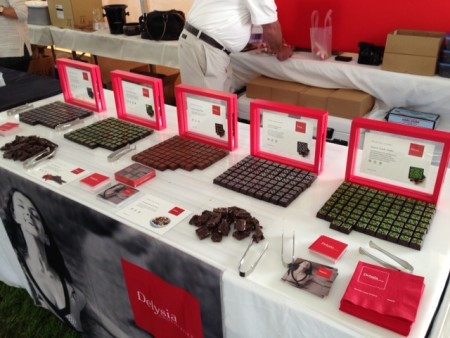 The Grand Tasting Pavilion was very different than what I had envisioned. It was beautifully organized and perfectly manicured. But there weren’t celebrities everywhere as I had imagined there would be. Consumers and trade walk around not divulging who they really are. Unless you memorized the face of every possible important person, winery owner, and trade representative – you were bound to be caught off guard. It was funny – we would see the same faces day after day sampling different flavors – and then they would quietly slip you a business card, not actually saying out loud who they were. They were scouting, truly scouting for the next big thing!

With 15 lbs of ghost pepper bark, we showcased that chocolate to bring attention to our table. Word spread like wildfire. It was hilarious watching the chefs from the Landry Restaurant Group encouraging their peers to take the plunge. At one point there were 10 representatives standing at our table tasting the ghost pepper bark. My favorite part is still watching people’s faces. And we even helped our neighbor, Boisset Family Estates introduce new consumers to their sparkling wine. Festival-goers needing relief from the spicy bark rushed to their table for wine. At the end of the event, they jokingly thanked me for helping, stating that they have never served that much white wine at an event before!

Then there was the second morning, while trying to get my chocolate out of the refrigerated truck, I walked in on buckets of sushi being thinly sliced for an exhibitor table. As I was trying to work my way back to my section, the Executive Chef swung open the door, started yelling profanity at his team, and made it very clear they needed to get their act together for the day. I felt like I was on the set of Gordon Ramsay’s Hell’s Kitchen. I guess this stuff really happens!?! 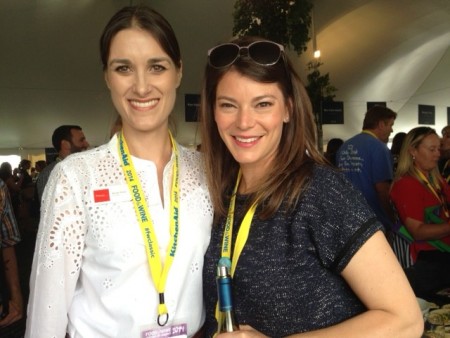 The highlights of the entire event for me was meeting Gail Simmons. She was pouring wine at the Estancia table. She said her husband had stopped by our table the day before and brought her some samples. She loved them! She was thrilled that I gave her a box of chocolate truffles. After a picture and an autograph, I was on cloud nine, and headed back to my table. A few minutes later, I looked up and there’s Gail, along with her husband, heading our way. She was coming specifically for our ghost pepper bark. I warned her of the ‘heat’ to which she stated, “That’s fine, I’ll try it!” She tasted it, looked at her husband, and said “You were right, that is wonderful chocolate” and gave us a thumbs up. 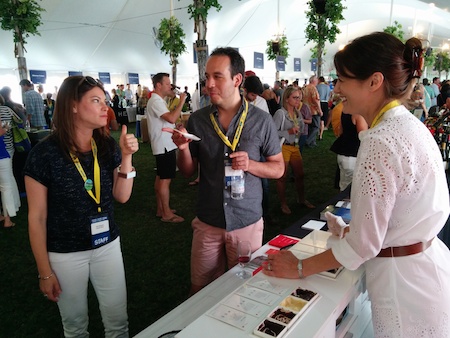 Thank you to the Staff
From the moment we we invited, the event was perfectly planned. I received a Welcome phone call and invite to an Exhibitor Party at the St. Regis. Arrival into town was met with signage directing us exactly where to go. Perfectly orchestrated load-in, complete with available parking, hand trucks, and numerous volunteers to assist with move in. I was even provided with a section of a Sysco refrigerated truck to store my chocolates for the entire weekend. Throughout the Grand Tasting, we were assigned a volunteer to provide support – waters, removal of trash…someone at one point even brought us a beer!

It was fun seeing wineries that we had visited during our recent trip to Napa & Sonoma. And we were introduced to so many new ones, many of which we hope to visit with again soon. We were directly across from Wines of Portugal, which was perfect as we already had a business relationship with some of the wineries pouring at the table. It was great seeing Six Grapes being poured and meeting with additional members of their team as a follow up to our visit with them when we were in San Francisco. Port and chocolate – doesn’t get much better than that!

We can’t wait until next year and hope that we have the pleasure of being invited back. To the Event Staff at the Food & Wine Classic in Aspen – thank you, thank you for the best experience throughout the weekend. This set the benchmark for events for us: the best planned and executed event we have ever participate in. Thank you for the hospitality, kindness, and opportunity.