Here in the United States, our holiday traditions often include sweet treats like candy canes and hot chocolate.  But did you know that in many other parts of the world, chocolate is also an integral part of the holiday tradition? 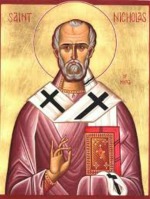 In Great Britain, for example, the Christmas tree is often decorated with small chocolate candies to be enjoyed by friends and relatives when they visit.

An even older holiday tradition dates back to the 4th century, when the generous bishop of Lycia (modern day Turkey), known as Saint Nicholas, was said to have given coins to the poor children in his city.  This legend is also attributed to the modern tradition in many parts of the world of filling stockings with chocolate coins wrapped in gold foil (source: Wikepedia) .  In the U.K., the coins are even made to look like real money!

Chocolate coins are also traditionally given out as gelt – or money – to Jewish children during the Hanukkah season.

In the Netherlands, a chocolate letter known as a “chocoladeletter” is given to loved ones during the traditional Christmas-time feast of Sinterklaas (source: St. Nicholas Center).  The letters, which represent the first initial of the recipient’s name, are such a big part of Dutch tradition that chocolate makers in the Netherlands produce around 20 million of them each year.

You can make chocolate a part of your family’s holiday tradition with one of Delysia’s specialty chocolates.  Stuff your loved ones’ stockings with some delicious peppermint bark, sip some of our gourmet hot chocolate and marshmallows by the fire, or decorate your table with a molded chocolate Christmas tree this holiday season.  Look for more holiday treats on our Pinterest page.