A few months ago, Rahul came home from work and announced that he needed to take a business trip to San Francisco for the 2014 Cisco Live conference. He asked if I wanted to tag along, to which I declared “YES!” and suggested tacking on a vacation to the Napa Valley. We had visited wine country five years earlier, right after launching Delysia Chocolatier. I loved it and have longed to return.

With the compounding amount of stress over the past year, a relaxing vacation for just the two of us seemed like a dream. And a break before the Food & Wine Classic in Aspen seemed like an excellent idea. While Rahul was attending courses learning about Cisco’s latest technology trends, I found some time to wander around San Francisco.

As you might already be aware, the food scene in San Francisco is amazing. It was challenging to prioritize where to eat, shop, and explore. Our first morning in the city, which also happened to coincide with my birthday, we found this tiny one-table restaurant named farm : table. I had the best breakfast toast in the world. I know that seems so boring and I truly did not know what to expect. But placed in front of me was the best hand baked slices of bread smothered with fresh, tart raspberry jam, topped with slices of oranges, strawberries, and raspberries and then sprinkled with chopped pistachios. Fabulous!

As we were enjoying breakfast at the community table, we struck up a conversation with the gentleman next to us. Rahul and a friend explained the Cisco Live Conference, I chatted with him about the chocolate biz, and he gave us some excellent restaurant recommendations. Then we asked what he did for a living, to which he responded, “I founded Open Stack and now own Piston which we recently sold to Cisco.” The very nice, young gentleman we chatted with for over 45 minutes was Joshua McKenty. We were astonished!

San Fran seems to be filled of tech foodies – my kind of town! We were walking to dinner one evening and overheard someone on their phone talking about how he turned down a deal to sell his company to Facebook for 7%. Such a surreal city, full of surreal people!

To continue the birthday celebration, we had dinner at one of Josh’s recommended restaurants, Bluestem Brasserie. Close to Union Square and Powell Station, the Brasserie was modern and trendy, but at the same time very relaxing. It was fun to unwind over a wonderful meal. The menu options were amazing and we had a difficult time choosing what to order. So we decided to order whatever we wanted, after all – it was my birthday!

First up was the pan seared black truffle pierogi served with bacon-leek marmalade and a poached egg. I haven’t eaten a pierogi this delicious since I visited my Ukrainian grandmother six years ago. The dough was the perfect soft texture with just enough crunch from being pan seared. The filling was a luscious fluffy potato mixture with just a hint of flavor from the black truffle oil. The next appetizer was fried green tomatoes (oh how I love fried green tomatoes) served with handmade mozzarella, and basil. The tomatoes were breaded in panko so they had a wonderful crunch without being oily. The highlight of the meal was the entree – their lemon pepper fettuccine with morsels and fresh garden English peas with pea shoots. I could have eaten that meal every night if the wallet would have allowed for it!

The rest of the week’s focus was on the conference. With sessions starting at 8am sharp, we needed a good hearty breakfast close to the Moscone Convention Center. We found The Grove and this became our daily breakfast spot. Everything, and I mean everything, we ordered was delicious. The crunchy fresh rustic bread used on their sandwiches was to die for. The breakfast burrito was huge and could feed two people with leftovers – it was amazing. They had shepherds pie, chicken pot pie, enchiladas, and any other comfort food you could image. And they had pastries, pies, and cakes with servings enough to feed three people easily. I’m still sad that I didn’t get a chance to indulge in the cherry apple pie. To whomever owns The Grove, we need one of these in Austin, please!! 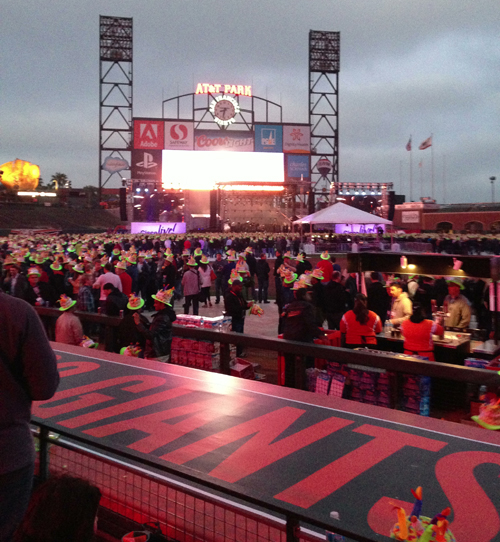 At the end of the conference, Cisco threw a big party to thank their clients for attending. This year Cisco was celebrating their 25th Anniversary of the conference, so the party was grand. They rented out the San Francisco Giants’ AT&T Stadium for the evening, opening up all of the ballpark food vendor stations, and booked Lenny Kravitz and Imagine Dragons as the entertainment. Now that was a party!

After five days in the Fog City, we headed to Napa Valley. Be sure to follow our upcoming blog series to hear all about our travels throughout the wine country.