It has been an exciting few weeks. We have received some wonderful opportunities that I would have never imagined would be possible when I launched Delysia Chocolatier over five years ago. Request from Mack, Jack & McConaghey for chocolate truffles favors for their fashion show?!? Celebrity Chef Tim Love recognizes me?!? A private introduction to Martie Maguire & Emily Robison from The Court Yard Hounds – and the Dixie Chicks – a gift of chocolate in hand for both?!? It’s too surreal to wrap my head around.

Have you read our newsletter yet?? Big announcement there: we’re heading to Aspen to participate in the Grand Tasting at the Aspen Food & Wine Classic.

A huge goal of mine for Delysia – something I didn’t think would come true or was even plausible this early on in the business. I had to read the invite four times to make sure my eyes weren’t doing tricks on me. And then I had my husband, Rahul, read it to make sure!

When I started Delysia Chocolatier, it was basically a hobby. I expected a small order here or there; a wedding or event a month. I often tell people, after five years of trying to stick to my business plan, strategy, and product roadmap, “This business has a mind of its own, and it has taken me places and given me opportunities I never would have imagined.”

We are at the tail end of tasting event season. Thursday night is the SFC Farm to Plate, the last of four tasting events in a ten day period. We have never taken on that much in such a sort period of time. And it was wonderful! Interacting with folks as they try my chocolate for the first time is still my favorite part of Delysia.

As I relaxed with my family and friends this past weekend, we reflected on previous events that I guess you could say paved the way to Aspen. I’d love to share some of our experiences (and funny stories) with you. 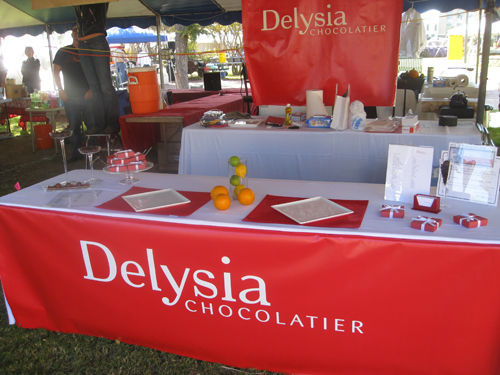 Standing in the blazing Texas sun, there was a strange whiff of an aroma – a rotten aroma. What is that smell? It smelt of roadkill and it was coming from the grill next to us. The gentleman selling meat spices and seasonings was grilling rotten chicken. Apparently his freezer stopped working in the middle of the night. For obvious reasons, the tent cleared out. We were only three hours into a seven hour event. No more foot traffic – our portion of the event was over. And the memory of a smell I will never forget! Fortunately, we didn’t get salmonella. 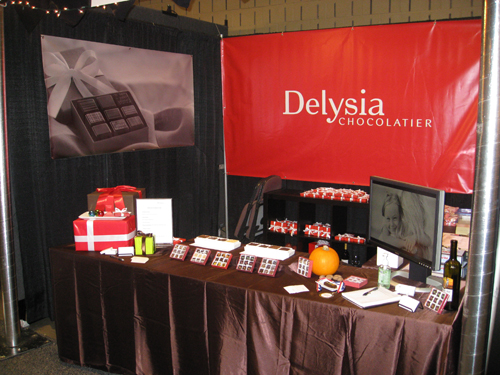 Junior League Christmas Affair
In business for almost two years, with a newborn in-tow (Colin was two months old), we decided to participate in the Junior League’s Christmas Bazaar. Exhausted for obvious reasons, to this day I don’t know why I decided to take on such a strenuous event so soon after Colin being born and so close to the holidays. But we needed to get the word out about Delysia Chocolatier. It was a wonderful event for marketing and attendees were introduced to our handmade chocolate truffles.

What do I remember from this event? It has absolutely nothing to do with chocolate. The Palmer Event Center was packed with people so bathrooms were at a premium. I was nursing and needed a private place. The only place we could find was the bathroom in the back alley without a light and no heat. At least there was a lock on the door! 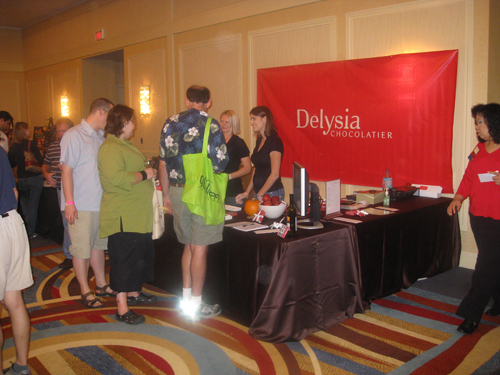 In November 2009, we headed to Houston to participate in the Texas Chocolate Festival. Driving out of Austin, with three coolers full of chocolate, we were excited for the potential exposure to a new market within Texas. The next morning, we were surprised by the lack of attendees. It cost us over $1000 for gas, hotels, food, etc and we sold $200 worth of chocolate! Stressful at the time for a new business, though we laugh about this now – everyone has to start somewhere.

I always look for the positive. There was a chocolate competition as part of the event. We won Grand Prize in the Professional Category for our cigar, wasabi raspberry, and cabernet sauvignon truffles. Our very first award!

Since that Houston event, the Festival has moved to the Texas Hill County and is packed with chocolate-loving patrons. It is one of our event highlights of the Fall ever year. And the organizers are absolutely wonderful – some of our biggest fans. 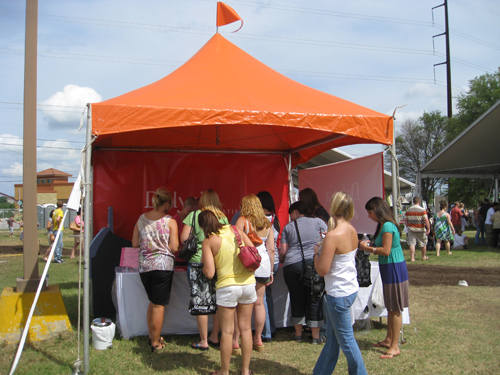 Austin Wine & Music Festival at the Domain
A few years back, the Austin Wine & Music Festival used to be at the Domain. The first year we participated, I believe it was in 2010, it was a very rainy Spring. We stood in our tent watching storm clouds move across the sky, coming closer and closer to where we were standing. As the skies opened up, dumping buckets of rain on the tents and flooding the grounds, it dawned on us that we were standing in water with live electrical codes in it. And we couldn’t find an event organizer to turn off the main power!

The next morning, we arrived to the festival grounds. The event organizers had moved around the winery tents to get them out of the mud and water that was remaining. We were assured that although we were now surrounded by empty tents, that we would still get foot traffic. The doors opened. Two hours passed – no one came by the tent. We assumed everyone decided to stay home because of the weather the day before. Rahul decided to go walk around to see how many people actual showed up. The place was packed! But no one knew we were even there.

A quick move to the ATM tent out in the middle of the action rectified the issue and we had a fabulous event – rain and electrically-charged flood water and all.

Wine Festival in Fredericksburg
I don’t even remember the name of this festival, I just remember it being at the Wild Seed Farm in the Texas Hill Country. It was Mother’s Day weekend – over 95 degrees. Why I decided to attempt an outdoor festival in that type of weather I still don’t know.

We were supposed to be provided with a tent. But they didn’t have enough event tents for everyone. So we were given one that was used for the plants on property. Now the Wild Seed Farms sells plants. And the tents they have on property act as a greenhouse – not very conducive to chocolate!

It didn’t matter how much ice we had in our coolers. It didn’t matter what we tried. The tent was acting as a green house, letting in more heat and sun than it was keeping in. I lost over $1500 worth of product. It’s difficult to sample/sell melting chocolate. By 2 PM, we called it quits and decided to go drown our sorrows in Texas Hill Country wine. So it wasn’t all a loss and ending up being a nice relaxing weekend. 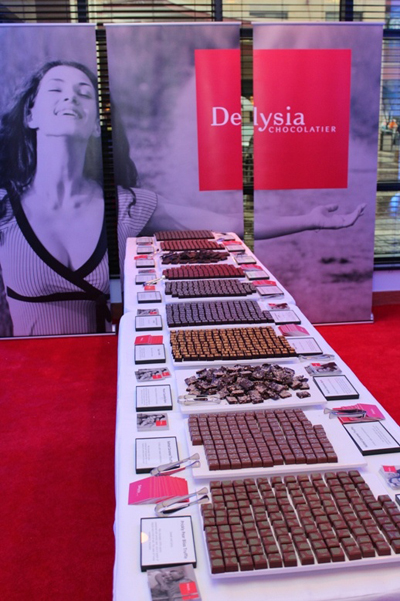 Ask.com SXSW Sweets Party
In January 2012, we received a call to participate in the Ask.com SXSW party. I thought, “This is it! We’ve made it. This is the opportunity I’ve been waiting for!” I spent months before the event prepping. We ordered new signage. Changed our table display. Experimented with new flavors. We had been told that the CEO of Ask.com was a chocoholic. I had to impress!

We arrived in downtown Austin, excited to showcase our products at SXSW. We expected a huge crowd, tons of social media exposure, and potential press coverage. What an opportunity! We arrived two hours early, worried about traffic and finding a place to park. Too nervous to eat, we sat outside the room watching the other participants sample out their sweet treats, waiting for our turn.

Our time arrived – I was ready to set up truffles on a twelve-foot long table. I was told to wait, the other participant wasn’t quite finished. Ten minutes passed, then 15, then 30 minutes past our allotted time. When was my turn? I only had an hour slot.

Thirty minutes – 1/2 way through my allotted time to share my chocolate creations – I was finally able to set up. It took four of us, but we displayed 1500 truffles on the tables in under five minutes! I looked up, proud of our feat. The room was empty … where did everyone go??? Asking the Ask.com event organizers, I was informed that the event ended 35 minutes ago and that the doors had been closed. I had been scheduled for a time slot after the event was over.

The 12 foot long table was beautiful, covered with 1500 truffles. Only 20 were consumed.

So you can see, we have come a long way since these early events. It’s my dream to keep moving with the ebb and flow, the ups and downs. I’ve highlighted experiences from some events that you might say were some major ‘downs’ for Delysia. To me these experiences, reflecting back, are some of the ones I cherish the most.