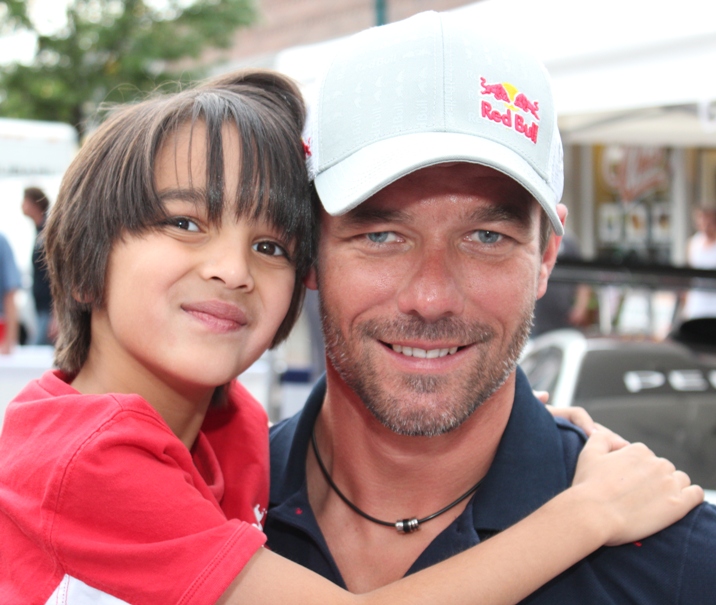 When it was announced that Austin was going to be the site of America’s only dedicated Formula One track – Circuit of the Americas – I made it my mission to become their exclusive chocolatier. I’m proud to say I accomplished this goal and then some. Both of the truffles I created exclusively for the track’s debut race – jalapeño tequila truffle and sweet tea vodka truffle –  went on to become consecutive finalists in the International Chocolate Awards.

European racing has been a passion of mine and my husband Rahul’s since we began our relationship. We even named our sons after drivers: Sébastien is named for Sébastien Loeb and Colin was named for the late Colin McRae. Rahul, having followed the sport since watching the Speed channel in the early 90s, dreamed of seeing a race in-person. So we planned our honeymoon in 2003 to correspond with the Spanish Rally (Rally de Espana). Being novices to the sport, we were only able to experience the cars racing out of town at 4am. But it was enough for us!

In 2005, we attended the  German Rally (Rally Deutschland) where we first met our good friend Markus Stier, a German journalist with Auto Motor und Sport. He taught us most of what we know about racing and Sébastien Loeb.

We immediately became Loeb fans – he is an unbelievably talented driver in addition to being one of the most modest athletes ever. He races in a Citroen in the WRC (World Rally Championship) and has been the World Rally Champion for the past nine consecutive years. When we told Markus we were expecting a baby and that we were considering the name Sébastien, he promised that our own little Super Seb (Loeb’s nickname) would someday meet his namesake.

In 2006, the year our Seb was born, Loeb won the championship while sitting on his couch. He broke his arm and could only race for a portion of the season. Our younger son’s namesake, Colin McRae, raced on Loeb’s behalf. He was known for driving on the edge, always giving 100%. Sadly, McRae died in a helicopter crash so Colin will never get to meet his namesake. But he makes up for it by being  a huge Loeb fan!

Rahul and I first met Loeb in 2007 at the Corsica Rally, when Markus told the Citroen team and Loeb that an American couple named their firstborn after him. At the 2008 Sardinia Rally, our Sébastien, at 18 months old, was introduced to his namesake. We met again the following year at the Portugal Rally, when little Seb decided to rest on the steps outside of the Citroen area. Loeb walked out and almost fell onto Seb! We were so surprised, we almost missed the photo op. But we did manage to get a pic…and an invite into the VIP tent area.

When Peugeot announced they were partnering  with Loeb for this year’s Pike’s Peak International Hill Climb, there was no question – we were going. Our Seb is now old enough to understand who he was meeting and remember it for the rest of his life. Not only did we get to see Loeb race on American soil, we saw him smash the world record by over 1-1/2 minutes! It was truly an extraordinary experience for myself and my family as we continue to share in our love of racing.

I’m honored to be the official chocolatier for Circuit of the Americas. I look forward to continuing this partnership where I get to combine my two passions: chocolate and racing.

To see more photos of our racing-related travels, click here.